Bulimia Nervosa – Bringing It All Back Up 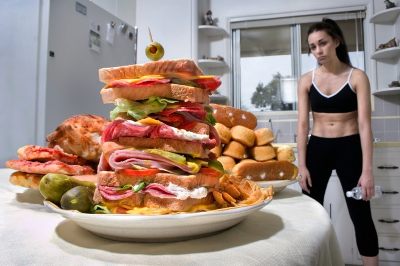 Anorexia and bulimia are food pattern abnormalities that commonly occur in women. Usually is a form of torture against yourself.

The second situation where it’s the same harm to the body. The disorder generated by fears that the body will become fat after eating and fear that radiated through physical torture.

In principle, anorexia and bulimia can be classified as a disease that is almost the same, called weight type phobia sufferers aka fear his weight gain. Literally, anorexia means loss of appetite. But not all sufferers of anorexia lose their appetite to eat. The feeling of fear of fat that cause them to retain an appetite is not natural, to the many who end up losing appetite and was not aware if their bodies completely wrapped in a skin of living bone.

Both of these disorders at a glance are almost the same. But what separates them is the practice of withholding food, also accepting any so anorexic.

While bulimia occur only to the individual who has the appetite, but spewing back discreetly. characteristics of early people with bulimia begins with excessive dieting and exercise, eat a lot but always spew out back or taking a diuretic drug to spew it back all the food.

Due to the habit of spewing back the food has been eaten, people with bulimia have had some health problems, such as the occurrence of abdominal wall injury, inflammation of the rectum, irregular heart rate, kidney damage due to the low intake of potassium, defective dental email because the creation of excessive acid production when vomiting and a cessation of menstruation. Unlike with anorexia.

Characteristics of people with anorexia usually grow from stressful family environment the importance of achievement as the value of family pride. Have excessive attention on perfection of appearance because the sufferer want to get attention from their parents are too busy. Characterized by physical changes such as hair loss, cessation of menstruation, slowed heart rate, low blood pressure and is not able to withstand the cold taste. Usually have more severe depression than people with bulimia and can cause damage to the liver and other vital organs if her weight dropped below the normal limit.

Characteristic of people with Bulimia nervosa itself are as follows:

1. The patient is more difficult to detect because of the weight of their bodies could have exceeded the normal, below normal limits, or even have a normal body weight.

2. Usually sufferers are women, both teens and young adults.

3. Main characteristics of people with bulimia begin with dieting and excessive sports, eat a lot but always spewing back all the food that has been consumed. Due to the habit of spewing back food that has been eaten with bulimia have had some health problems, such as the occurrence of abdominal wall injury, inflammation of the rectum, irregular heart rate, kidney damage due to the low intake of potassium, defective dental email because the creation of excessive acid production when vomiting and a cessation of menstruation.

4. Rage is stuck because of an inability to express emotions in a way that is uncommon. Normally bulimia sufferers are afraid to disappoint the people they love in their environment.

Feeling dissatisfied will own body shape and an inability to control the incoming food often accused as the main cause of the occurrence of bulimia. In addition, low self-esteem and inability to cope with stress is also referred to as a cause of bulimia nervosa. Although they are usually aware of have abnormal eating patterns, they do not try to handle it on their own. Don’t wonder if bulimia causes quite serious disruption for the sufferer.

Regurgitate the food repeatedly can result in skin irritation around the mouth due to its frequent contact with substances from the stomach acid, canker one male teeth, cavities, and prolonged stomach pain. The other effect is the heart pounding, dehydration, kidney damage, decreased muscle cells in the body, until a sudden death.

Excessive use of laxatives can result in diarrhoea and bloody. Bulimia sufferers can depend on laxatives, so they can’t defecate reasonably without the aid of drugs.

Bulimia nervosa can be followed by onset of anorexia, and vice verse. There are many factors that cause the occurrence of abnormalities in diet such as genetic disorders, social pressure to slim down, and the pressure from peers, and others.

Bulimia treatment advice for the sufferers of Bulimia is:

1. For patients with bulimia as above you should check with your doctor to yourselves or to a psychiatrist or nutritional therapy experts.

2. If you often weigh, mending the scales you guys were thrown away. Suppose that you guys broken scales, because surely you guys will feel less confident view of weight you guys.

3. Regarding the posture of the body, e.g. you about 165 cm tall and weighs 50 kg it is natural and normal. The difference is the case if you are short, and weighing your body is more than 50 kg. It’s the less reasonable, it should be seen from a lot of things to this bulimic.

4. Fear of fatness, should you not be afraid with the problem of obesity. Just eliminate all thoughts are afraid of you, because if you guys feel afraid of obesity, then you won’t forever. calm.

6. Bulimia is not a disease that can attack alone, you need support from your family and also the people who are closest to you, and the person who is considered a friend. Because family and friends will not be shameful of you, even those will help you guys.

7. Join a group-group whose members are “people suffer from” sort of the same thing with you, to find out the latest information and to sharing with their fellow sufferers of bulimia.

8. And lastly, remember that the pattern of healthy eating is the best way of life.

Don’t let ourselves under social pressure or peers. Another concern remains confident because the value of our personality is not determined by how skinny or fat our bodies.